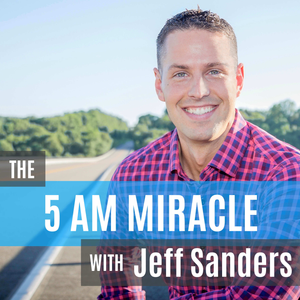 The 5 AM Miracle with Jeff Sanders

The Imperfect Guide to Success with NFL Star Bennie Fowler

Episode Show Notes jeffsanders.com/332 . Learn More About the Show The 5 AM Miracle Podcast . Free Productivity Resources Join The 5 AM Club! . The 5 AM Miracle Book Audiobook, Paperback, and Kindle . Connect on Social Media Facebook Group • Instagram • Twitter • LinkedIn . Episode Summary How can we break free from mediocrity and achieve the success others seem to so easily achieve? In this week’s episode of The 5 AM Miracle Podcast I speak with Bennie Fowler, a 6-year veteran of the NFL and author of the new book, Silver Spoon: The Imperfect Guide to Success. . Resources Mentioned in this Episode The 5 AM Miracle Audiobook [Read by Jeff Sanders] The Rockin’ Productivity Academy [Get 25% off with code 5AM25G0] Silver Spoon: The Imperfect Guide to Success [Book by Bennie Fowler] Bennie Fowler [Wikipedia Page] @Beanzz16 [Bennie on Twitter] . Bennie Fowler Bennie Fowler is a six-year veteran of the NFL. He began his career as an undrafted free agent signed by the Broncos in 2014. He spent four years with the Broncos and was a member of the Super Bowl 50 championship team in 2016. Bennie played college football at Michigan State University, where he was a member of the 2014 Rose Bowl championship team. Bennie holds the annual Bennie Fowler youth football camp in Detroit, Michigan, is an in-demand speaker trained through the NFL Speakers Bureau, and lives in Denver during the offseason.